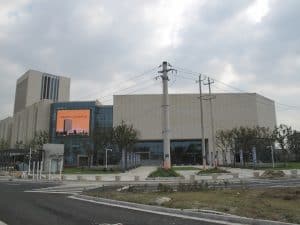 Wuxi, Peoples Republic of China – March 2015…  With a population of more than six million, the ancient city of Wuxi is one of the birthplaces of China’s industrial revolution. In recent years the city has undergone something of a renaissance, with long range development projects transforming the landscape. One of these projects is the New Wuxi workers Cultural Palace, a $350 million arts and cultural center housing a sporting complex, activity centers, and a 573-seat multi-use theater equipped with a Renkus-Heinz point source loudspeaker system.
The system, designed by Zhejiang Institute of Urban Investment and Development Co., Ltd., is based around Renkus-Heinz ST-Series Complex Conic systems. The left-center-right configuration features a pair of STX7/64 dual three-way 12-inch loudspeakers in the center, flanked by three STX7/94 boxes on left and right. Supplemental fill duties are handled by 12 TRX61 two-way systems. Low frequency reinforcement is covered by a pair of DRS18-2B direct radiating subwoofers, ground stacked on either side of the stage. 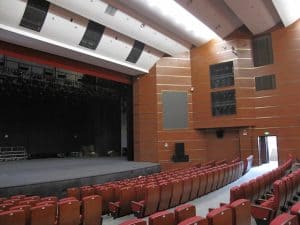 Performers onstage enjoy a versatile monitoring system including six TRX121 12-inch two-way systems and four TRX151 15-inch two way boxes. QSC amplification powers the system, with a Yamaha PM5D 48 channel digital console at FOH and a 40 channel Midas Verona analog desk handling monitors.
“The theater is used for a wide variety of programs, from opera and ballet to musicals, symphony, and other performances,” explains a spokesperson for CAH Professional Sound, the company providing the equipment for the project. “Versatility was a critical consideration in the audio system design, and the Renkus-Heinz loudspeakers deliver high performance, high reliability, and excellent pattern control. Utilizing a left-center-right configuration of ST-Series loudspeakers, it was possible to provide consistent coverage across the entire audience. The compact TR-Series cabinets covered a handful of shaded areas in front and upstairs on the balcony level.”
The New Wuxi Cultural Palace Theater opened its doors in 2014, and has since enjoyed a regular schedule of performances and events. CAH’s spokesperson reports the venue has received praise for its excellent sound from attendees and performers alike. “The Renkus-Heinz system has performed well beyond even the most optimistic expectations. The sound in the theater is clear and articulate, with excellent fidelity to every seat in the house.”